MPC has a long-standing tradition of artistic excellence. Here, the relationship between faith and the arts is expressed in a vibrant, active, and highly professional program.

People of all ages have opportunities to participate.

Our band, Catalyst, plays contemporary Christian music once per month at the 8:30 a.m. service.

The Chancel Choir sings for the 11:00 a.m. service each Sunday and rehearses on Wednesday evenings from 7:00 p.m. until 8:30 p.m. Participation in the choir is open to all members and friends of the congregation.

The Cherub Choir (Four-Year-Old to First Grade) rehearses each Wednesday night from 6:00 p.m. until 7:00 p.m. under the leadership of Molly Vaughn.

The Jubilee Choir (Second to Fifth Grade) rehearses each Wednesday night from 6:00 p.m. until 7:00 p.m. under the leadership of Kris Kelly.

The MPC Children’s Choirs sing periodically in worship as well as perform annual concerts and musicals.

The Handbell Choir rehearses on Wednesdays from 3:00 p.m. until 5:00 p.m. New members are always welcome.

If you would like to participate in any of these opportunities, contact Sue Kamerzel who will put you in touch with the appropriate person.

MPC’s vibrant music program is complemented by student musicians and vocalists from Flagler College. The students study and practice with our choir and music director and sing each Sunday.

If you would like to participate in any of these opportunities, contact Sue Kamerzel who will put you in touch with the appropriate person.

MPC hosts Flagler College art interns once per semester. The program started in 2019 to help expand upon the relationship between the church and the college. Participating art students come recommended by a professor, are interviewed, and then take the semester to capture scenes of Florida, St. Augustine, and/or the church.

The students work with the medium of paint on silk, a specialty discipline that requires a unique skill set. MPC then displays the interns’ work, which is completed on silk banners, in our fellowship hall.

Praise the Lord with the lyre; Make melody to him with the harp of ten strings.

With the construction of the sanctuary of MPC in 1890, Henry Flagler selected the Roosevelt Organ Company of New York City to install the first pipe organ for the congregation. The central case contained the entire organ with a three-manual console built into the case located behind the mahogany screen. 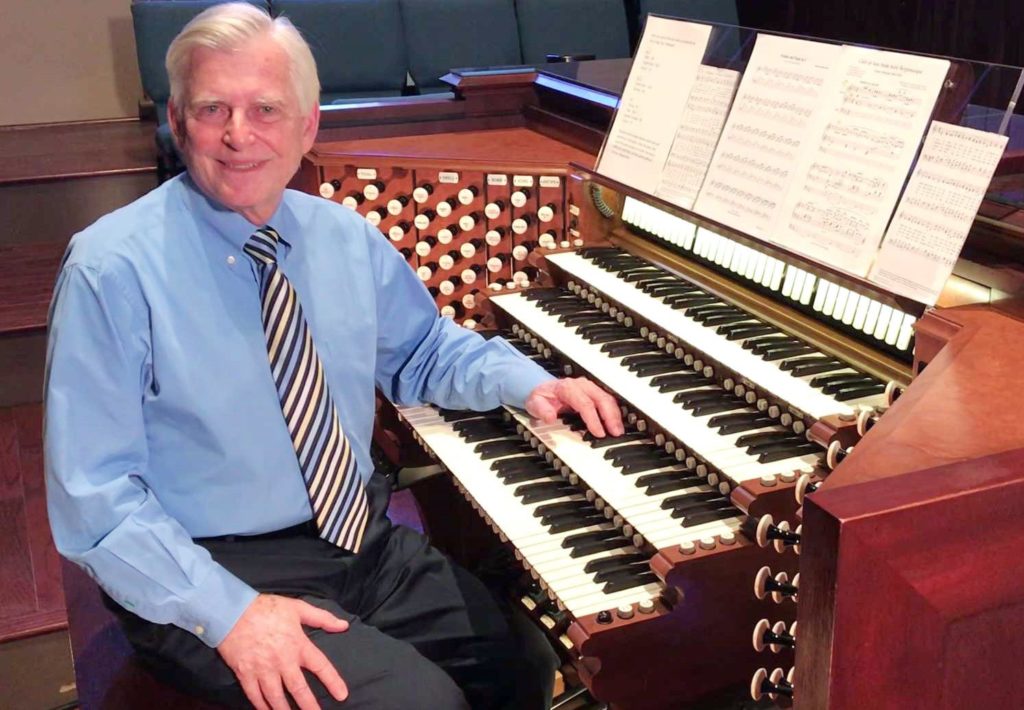 At that time, the church lacked a choir so soloists and ensembles performed on the chancel level in front of the screen. In 1927, the Estey Organ Company of Battleboro, Vermont, rebuilt the Roosevelt organ, expanding it to 56 ranks and adding two additional divisions of pipes: one on the north balcony and another on the south balcony. The Estey Company also expanded the organ console to four manuals. The organ continued to serve the congregation for several decades earning high praise for its tone and quality.

In 1969, Reverend Dr. David Redding and organist Everett Eubanks approached two long-term members of the congregation about funding a new pipe organ for the congregation. Mr. and Mrs. Howard Johnson, closely tied to the Mellon family of Pittsburgh, Pennsylvania, provided the money necessary for the project. The church selected the Aeolian-Skinner Pipe Organ Company of Boston, Massachusetts, to install the new pipe organ. The new organ contained 90 ranks and over 5,000 pipes including the chimes from the old Roosevelt-Estey organ.

In 1971, the organ expanded with two additional divisions: the Bombarde division above the organ in the casework and the Antiphonal division in the north balcony. The Aeolian-Skinner organ at MPC represents one of the “American Classic Organs” produced by the company during this period.

In 2000, R.A. Colby, Inc. of Johnson City, Tennessee, rebuilt the organ console adding new MIDI technology to the organ allowing the organ to be played remotely in six locations throughout the sanctuary.

In 2012, the organ underwent its first major overhaul and rehabilitation since its installation in 1970. Over the course of a year and a half all of the organ pipes were thoroughly cleaned and all of the wind chests inspected and repaired. A tonal expert then voiced each of the organ’s pipes, an effort requiring several weeks. In addition, Walker Technical Company of Zionsville, Pennsylvania, installed digital voices designed to augment the organ’s sound and tone, bringing the organ to 155 ranks. Two additional divisions were added: an Echo division over the south entrance and a Solo division in the main organ. The William R. Kenan Jr. Charitable Trust awarded a grant of $350,000, to cover the cost of the entire project. William R. Kenan, Jr., was the brother of Mary Lily Kenan, Henry Flagler’s third wife. With the completion of the project, the organ is now poised to continue serving MPC’s congregation into the future.

The Aeolian-Skinner organ is played for both the 8:30 and the 11:00 a.m. services on Sundays and on other church occasions. Organ concerts throughout the year are also offered, including a weekly series on Wednesdays during Lent.